Usually in meteorology, just enough atmospheric components come together to create a bad, but not devastating, event. Just as often, we encounter events where some components are not lined up correctly and are subsequently considered “bust”.

Rarely does every single component fall into the perfect place to create real havoc. But, as it happens, the results haunt us for decades. April 27, 2011 was one of those times.

If the Superstorm of 1993 was the spark that sparked my interest in meteorology, April 27, 2011 was the one that finally prompted me to pursue a deeper understanding of the atmosphere.

I still wasn’t a resident of Alabama in 2011 because I didn’t move south until 2013, but I know many people there. I could have safely watched the events unfold from over 1000 miles in Pennsylvania, but my then-husband friend lived just south of Birmingham. His father witnessed the Tuscaloosa-Birmingham EF-4 pass just north of his location as he drove on his mail route that afternoon.

Another friend worked in the insurance industry and was sent to Tuscaloosa the next day to help clean up and restore. He had lived in Alabama all his life (about 30 years at the time) and remarked to me that he had never, ever seen anything quite like the devastation a tornado caused.

As mentioned, this outbreak is the product of every single parameter perfectly arranged to represent the full range of fury our atmosphere can have.

I want to stop here for a moment and elaborate on some of the things that will become important later.

There was a preliminary storm occurred in the early morning of April 27. 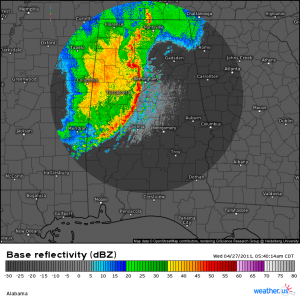 Regardless of the time of day, this convection is extremely powerful. It produced several fairly powerful tornadoes (EF-2 and EF-3) over Mississippi and North/Central Alabama. These tornadoes are the cause of power outages in many communities. They also caused problems for some NOAA broadcast locations, resulting in the loss of life-saving weather radio warnings for affected communities.

A potentially dangerous situation later that afternoon turned downright dangerous. Without power or the ability to receive weather information or warnings, many people would be completely unaware of what would come their way later in the day.

As mentioned above, after the morning storm, the sky cleared as the area exited to the right of a jet trail moving through the area. 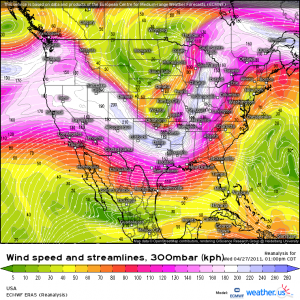 For those who don’t know why this matters, let’s explain a bit: The exit zone to the right of the jet trail is the position of overhead convergence, which translates into subduction motion on the surface. Submerged air will warm and dry, resulting in clear skies.

In general, these conditions will be counterproductive to extreme weather. However, as happened on 27 April, staying below the right exit zone and subsequent clear skies could cause additional instability due to daytime heating. This creates an atmosphere for later severe weather as the impulse moves through the area.

Those familiar with the weather and its basic operations know that clear skies before an expected outbreak of severe weather is not a good thing. Unfortunately, for those unfamiliar with meteorology, clear skies seem to suggest the worst is over. Those who were powerless and busy picking up debris from the morning storms had let their guard down too soon, too soon.

As the frigid front moved east, the supercells began to bloom, many tornadoes falling across Mississippi. By late afternoon, the radar displayed an unimaginable sight. 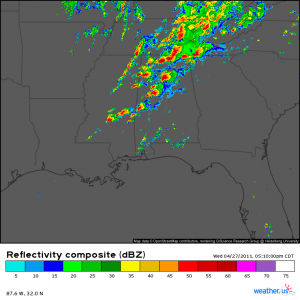 Supercell lines are visible from Central Mississippi through Alabama and into Tennessee. Many of these cells are responsible for intense and prolonged tornadoes. Communities that were affected by the morning storm were devastated again by the afternoon storm.

It is surreal. Unbelievable. It’s brutal. It’s saddening. It is a suffering soul.

As the day ended, 216 confirmed tornadoes hit six states. Six of these are long tracked and are on the ground 60 miles or more each.

That’s a rating break for those 216 tornadoes. They were responsible for 316 deaths and more than 2,980 injuries.

I don’t know about you but, even though I’ve watched the incident live and heard first-hand accounts from friends and (now) family, I can’t make sense of these numbers. I salute every meteorologist and emergency manager who worked from before dawn until midnight today to save lives. You are all heroes and have saved many lives that would otherwise have been lost.

Our atmosphere is an incredible one that can turn deadly when the ingredients line up perfectly. This day – or indeed the entire 4-day event – is a monstrous display of its capabilities. And I hope it’s never reproducible.