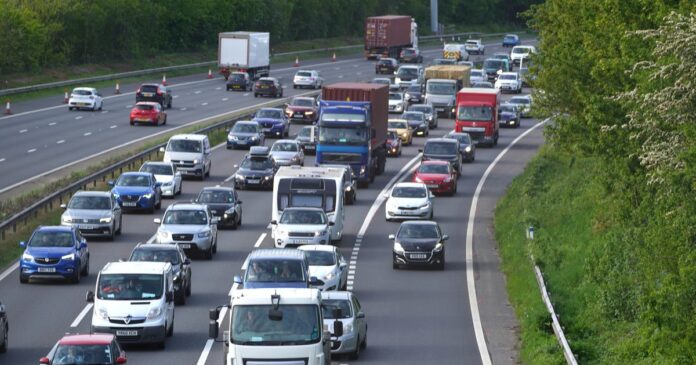 Drivers are being warned of possible lengthy delays next weekend as millions embark on an Easter break.

AA estimates that more than 27.6 million car journeys are scheduled between Good Friday and Easter Monday. An estimated 13.6 million people are expected on Good Friday alone, leading to concerns about potential payback on popular tourist routes.

AA spokesman Tony Rich said: “The Easter break is set to give UK tourism a much-needed boost as people cut back on overseas travel.

“With more than 27.6 million trips planned over the bank holiday weekend, we can expect significant congestion across the UK as people flock to the seaside resorts and holiday homes.”

An AA survey of 14,000 drivers indicates that 53% will use their car to holiday in the UK this year. About 20% will not take a vacation in 2022 due to financial pressures.

Drivers making long-distance trips will be especially vulnerable to high fuel prices. The latest Government figures show the average price of petrol in the previous UK trading sessions on Monday was 161.9p a litre, while diesel was 176.0p a litre.

Those traveling for the Easter holidays using other modes of transport also face difficult journeys. Several airlines and airports are struggling to cope with illness and staff shortages, with more than 100 daily flights canceled by easyJet and British Airways in total.

Rail passengers are being warned of disruption as Network Rail undertakes 530 engineering projects with a total cost of £83 million. This includes the closure of the West Coast Main Line between London Euston and Milton Keynes from Good Friday to Easter Monday due to an upgrade to the existing line and operational HS2.

Cross-Channel ferries will also be busy with many traveling abroad or families returning at the end of the two-week Easter holiday. Roads in Kent have seen long queues in recent days due to ferry shortages as P&O Ferries halted sailings after it laid off nearly 800 crew members without notice.

The operator said it plans to resume operations on the Dover-Calais line next week pending regulatory approval. Meanwhile, new figures show the UK’s tourism industry is beginning to recover after being hit hard by the travel restrictions introduced during the coronavirus pandemic.

The UKinbound trade association, which represents more than 300 businesses dealing with tourists visiting the UK, says 39% of its members are reporting that international bookings and the number of visitors within April-June period is expected to be equal to or higher than pre-pandemic.

The US market is recovering the most, with one out of every three businesses growing in that area. But about 61% of businesses expect lower demand, showing how the sector continues to struggle.

UKinbound chief executive Joss Croft said: “It is fantastic to see international visitors return to the UK and we are delighted to see the strongest growth from our number one market. us, United States.

“The end of all UK travel restrictions has given international consumers the confidence to start traveling here again.

“Compared to 2020 and 2021, business is booming, but we are lagging significantly behind the prosperity of 2019 and our competitors.”

For more stories from where you live, visit In your area.