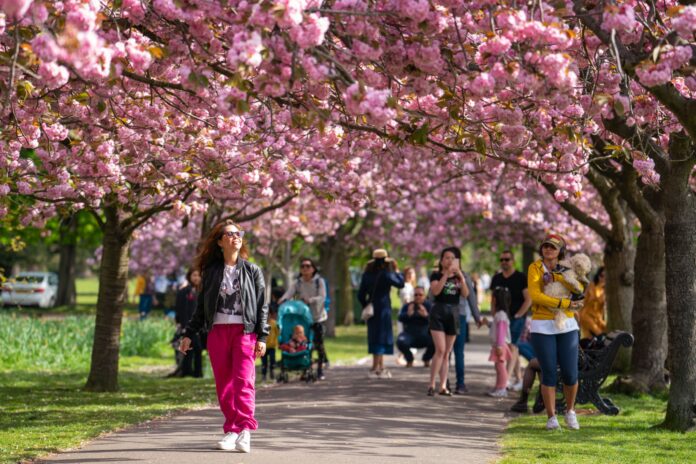 Sunny weather across most of the UK and some travel disruption is expected to continue through Easter Monday.

It comes as Britons bask in above-average temperatures over the bank holiday weekend, while 27.6 million car trips are expected in four days.

Mercury could hit a high of 19°C across England and Wales on Sunday, following a peak of 21.6°C in Chivenor in Devon on Saturday.

Good Friday has been the hottest day of the year so far, with a peak of 23.4°C recorded at St James’s Park in central London.

While Easter Monday is expected to be a bit cooler with some cloudy skies, most areas will remain dry and clear.

Met Office meteorologist Tom Morgan said: “We’re not going to see high temperatures like in the past few days.

“But anyway, there’s plenty of nice weather for Monday. There were only a few showers in the North and West of the UK but most places were sunny and light winds, with most still feeling relatively warm. “

Temperatures are likely to remain above the seasonal average for the rest of the week, with peaks of 17 degrees Celsius in some areas, Mr Morgan added.

The Easter travel disruption is also expected to begin on Monday as UK holidaymakers return home from their getaways.

The RAC has estimated nearly four million leisure journeys will be made on UK roads, making Easter Monday the second-busiest of the weekends after Good Friday.

The clockwise M25 between junction 8 and 16, the southbound M6 between J20 and J16, and the northbound M3 between J14 to J7 are likely to experience the heaviest congestion.

The RAC said the early afternoon would be the worst time for drivers.

Rail journeys could also be delayed, with Network Rail doing 530 engineering jobs over the four-day weekend.

Dozens of train services in and out of London were cancelled, and Euston remained closed for the rest of the day.

Long queues could also continue at Border Control – which is experiencing staff shortages – with large numbers of travelers returning to UK airports from abroad at the end of the Easter holiday. .