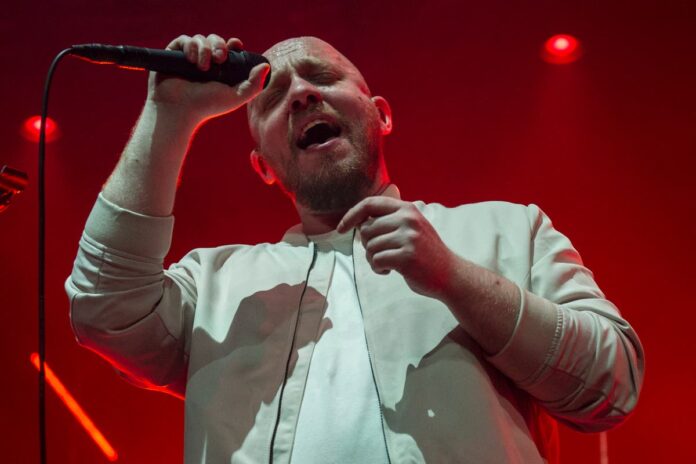 First breaking through at the dawn of the 2010s, Manchester-founded art-rock outfit Everything Everything has always focused on a kind of stimulantism that sets them apart from the rest of the franchises. mathy partner. While the rest of the band kept busy with sweaty house parties and signature swinging guitars, the quartet felt more indebted to US new wave bands like Devo – from the start they swapped jeans to match the boiler suit – and incorporated a variety of reference points.

Their 2009 breakout single MY KZ UR BF is striker Jonathan Higgs’ answer to an old R’n’B song shot through a strange prism, upside down and overlooked by the end of the world. that’s about to happen. That eclectic approach survived more than a decade later. Their upcoming sixth album Raw Data Feel – out May 22 – is written in part by an AI robot.

If some of this sounds a bit confusing, Everything Everything is the opposite of impenetrable; Although their fascination with technology and rising unrest often feels strange and erratic, giant stadium-ready choirs have a habit of erupting from their giddy crew. surname.

Many of these anthems fill the cave core of the Round House in London. While Kemosabe stammered, Higgs held out his microphone to the audience, who got serious about the calls and answered at the perfect timing. Having made a splash over the past two years, Cough Cough’s percussion and echo hacks are also contagious. Keeping stage stereotypes to a minimum, Higgs occasionally uttered greetings between songs, mostly focusing on the rest of his band in white. Overall, they look like a well-dressed team.

Occasionally momentum calms down; Teletype’s sharp sacrificial hats are noticeable indoors, and Warm Healer’s closing moments gently sink into a puddle of mud. Fan favorites MY KZ UR BF and Regret are conspicuously absent, and although the footage has not yet been released Jennifer and Pizza Boy have been warmly welcomed – the whole audience applauds to the lively rhythm of the latter – the middle of the show is largely occupied by pastoral epics, which span the veins of In Birdsong. With the attention on the intricate stuff at hand, it tends to feel a bit detached.

Speed ​​quickly rebounded for an intense performance of Spring/Sun/Winter/Dread and Roundhouse responded with a swirling moshpit, Higgs backing forward and overseeing the chaos. Bottle of beer in hand, bassist Jeremy Pritchard took a moment to capture the scene just before kicking off into a playful encore, and surrounded by bright neon lights, Far Past and No Reptile brilliant eccentricity perfectly captures the eerie feeling of euphoria that Everything Everything expresses so effortlessly