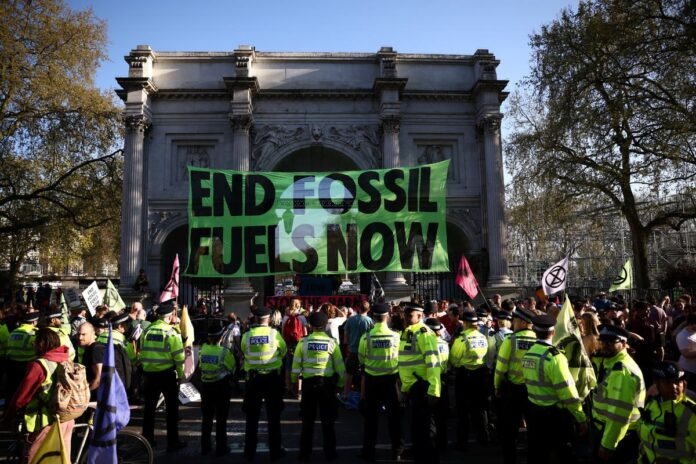 Dozens of people have now been arrested as Extinction Rebellion continues with protests across London over Easter weekend.

As of 2pm on Sunday, the Met police said there had been 213 arrests related to Extinction Rebellion since April 9.

The arrests were made for a number of charges including causing criminal damage, obstructing a highway and Article 14 of the Public Order Act.

Another group targeted a Shell oil tanker in Bayswater Road, in London, leading to at least six arrests over the weekend.

Activists, including Olympic athletes Etienne Stott and Laura Baldwin, climbed onto the top of the tanker, Extinction Rebellion said.

On Good Friday, the group crossed London’s bridges bringing the capital to a standstill.

They marched onto Westminster Bridge, Lambeth Bridge and London Bridge to protest the Government’s response to climate change.

Others gathered in Hyde Park and marched through the streets of the capital in protest.

Extinction Rebellion hit the streets of London throughout April in an attempt to disrupt the fossil fuel industry.

They said: “In April, Extinction Rebellion joined forces with other movements to blockade oil facilities across the UK until the government agreed to our immediate request: an immediate stop. immediately all investments in new fossil fuels.

“In solidarity with all those around the world who are defending their lives, land, wildlife and cultures in the face of crisis, we will cause maximum disruption. material and tells the story of fossil fuel-fueled corruption at the heart of our democracy.

“We now need people to flood the streets of London from April 9 and make it politically inevitable to respond to an immediate need.”