Last week, we looked at establishing what could be a potentially serious multi-day threat. Unfortunately for the non-storm chasers, it looks like the event will go ahead as scheduled for Monday, Tuesday, and Wednesday.

As with most critical threats, the details on average that resolve themselves on the previous day/day of the day can control how the event plays out. For that reason, we’ll look at each threat in separate blogs the day before it happens. I’ll cover Monday today, Tuesday tomorrow (with and updating any changes for Monday), and Wednesday on Tuesday (with a current threat update).

So let’s get started right away with it.

As we can see in real time through the steam image, a deep trough is facing east. As it descends into the Rockies, this serious threat control system will be born.

We know it will move east of Texas on Monday afternoon and evening. But what will the atmosphere be like when you get there? 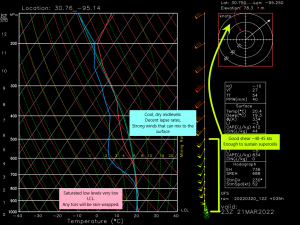 Here’s a GFS coming out of the weather.us website for just east of Bryan, TX at about 5 p.m. central. It doesn’t have the same high resolution as CAM (HRRR / NAM / etc), but we can still gather some important information about the state of the atmosphere from it.

We covered this a bit above when I mentioned saturation lows, but these storms will approach a fair amount of moisture. 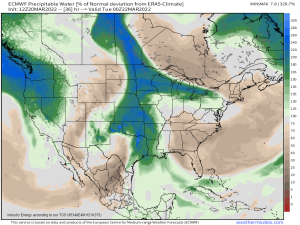 PWAT values ​​are forecast to be between 200 and 300% of normal in some settings. We’ll see values ​​that often emerge in the deep summer when you’re wearing air rather than breathing it.

If you still haven’t guessed where I’m going with this, here it is: flooding is possible, especially if storms start rolling in.

So the hazards across the board for Monday are strong winds, flash floods, large hail and tornadoes – some of which can be strong. In addition, the threat is forecast to materialize near dusk and then persist throughout the night. You know what I’m going to say next: there are multiple ways to receive alerts, including at least one that will wake you up!

Let’s look at the timing version of HRRR.

Scattered showers and storms are possible in the morning as the warm front heads north. They are generally expected to go high and below critical limits. The exception would be if any could become surface along the warm front.

These morning storms will cause energy availability to decrease a bit so afternoon cleaning will be key here. Where that void forms, there will be the strongest storms later. More instability through heating = more fuel.

Late in the afternoon, we see powerful storms begin to shoot out of the arid region of eastern Texas. This is the main program. Again, all hazards including flash floods are on the board. The longer these storms can be sporadic before becoming strong, the longer the strong tornado threat will persist.

Upstream growth is expected as the night drags on and uncertainty subsides. There could be damaging winds during this period as well as one or two tornadoes on the QLCS, but flash flooding could become a greater concern, especially if storm motion parallels the boundary as some model shows.

Tomorrow there will be a big storm. All hazards are present at first, starting with the threat of hail and a tornado, then transitioning to flash flooding with some accompanying gusts of wind.

Time is late afternoon overnight. There are many ways to receive alerts, including at least one that will wake you up. Have your plan ready and have your safe space ready in case you need to use it. Get ready to act quickly.

If there are any significant changes to the forecast, I will update in the first part of tomorrow’s blog. Otherwise, look for more information on the third part of the threat in a blog out later tomorrow.