The spring inclement season is really in full swing as we have 3 days this week with the prospect of convection and a much more potential 3 days set in motion next week.

We discussed the setup for next week in Tuesday’s blog. Today’s event is underway. So this blog will focus on the potential for tonight and tomorrow.

As mentioned, tonight’s event is already underway, albeit barely. The storm had just begun to shoot out of the shallows. At the time of this blog, so far there is only one box that looks like it has teeth and it is mostly a hunting dog. However, it is still early.

The storms are expected to continue firing into the evening before consolidating into a multicellular mass – more like the MCS (mesenchymal convection system) than the QLCS – at least for the northern part of the system. .

At the southern end, the thermodynamics will be much better. 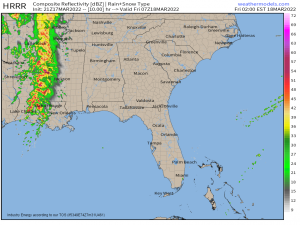 Dew point in the 60s, a bit more CAPE to work with, cutting on the order of ~40 kts, supporting surface winds from SE and high lapse rates can allow for more discrete cell formation , or perhaps multicellular clusters, relative to the solid line.

All the parameters mentioned above mean all hazards are in the table: strong winds, a few tornadoes (potentially strong) and heavy hail.

This threat, at least for a few hours overnight, will be more likely for southern Louisiana and southern Mississippi. 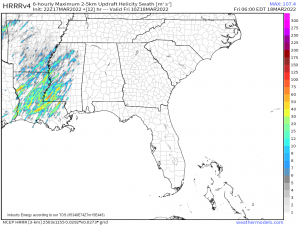 Using the Reverse Axis Support parameter, we see hurricanes that are likely to rotate, be it super typhoon or create a tornado, limited further south. As mentioned above, this is where the better thermodynamics come in.

Of course, the weather doesn’t just stop at sunrise. However, the storms are forecast to weaken to some extent as we near dawn and lose any remaining uncertainty. However, as the sun rises and warms the area ahead of ongoing storms, intensity is forecast to increase again in the late morning or early afternoon. 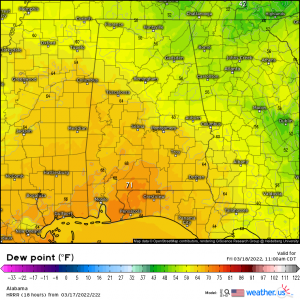 By mid-morning, areas along the Gulf Coast before hurricanes will look like summer with dew point pushing in the 70s. More humidity in general means more uncertainty for storms to hit. .

As the fault line moves into the moisture-rich and unstable air, storms can become quite powerful. 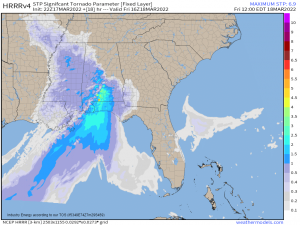 In addition to hail, a few strong tornadoes are possible, particularly along and just north of coastal areas. This threat would persist into the afternoon hours, pushing east of the Florida staff quarters before easing into the evening.

Usually, this would be the end of the menace, period. But not now. A secondary, but CONDITIONAL threat exists late afternoon/evening hours for the Tennessee Valley and Ohio.

Showers and thunderstorms in the morning so the atmosphere is stable. We will then depend on the discontinuity clouds and any heating that leads to instability again to fuel the second round. 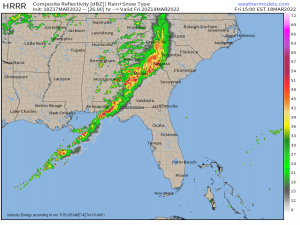 Assuming that happens, a second wave of hurricanes could start shooting ahead of the really cold front.

These storms are expected to be widely dispersed, mainly forming in places where there is enough instability to fuel them. However, if they form, they can complete the punch. High shear, cold air aloft thanks to the cold front approaching leads to high lapse rates, and strong low-flows mean large hail and a few tornadoes (stronger) are possible. ?).

Tomorrow is definitely a day to watch out for. If you’re in the Tennessee/Ohio Valley, don’t assume the threat is over after the morning storm. If the sun reappears in the early afternoon, assume you’ll run into another hazard, likely in the evening.

Since this is an overnight/early morning event for some, there are ways to get alerts that will wake you up if needed, especially near the Gulf Coast. Locations further east, take precautions and ways to receive alerts.

A serious threat also exists for the Mid-Atlantic and Southeast on Saturday. Sunday is expected to be a quiet day before we head into 3 serious days set for early next week. Check back here on Sunday for an update on that situation!