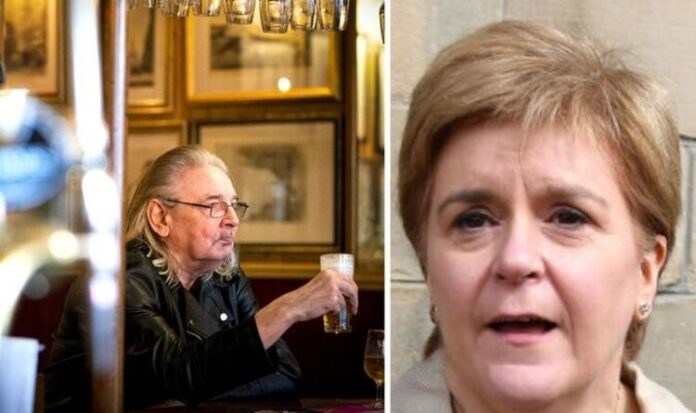 Scotland finally abolished their mandate today less than three months after England lifted restrictions. While Scots are relieved that the measure has finally been withdrawn, there is a “real feeling” in the country that it should have happened sooner. Despite stricter regulations, Scotland still records many coronavirus cases with a peak in March overshadowing the rest of the UK.

GB News Scotland correspondent Davie Donaldson said: “In Scotland, there is a real sense that we are three months behind the UK in terms of face masks.

“Many people here feel like we should have followed suit much earlier [England revoked mandatory facemasks].

“The ridiculous situation that some people see is someone who doesn’t wear a mask while sitting in a bar or restaurant but then has to wear it when going to the toilet.

“Many places will be happy now that the law has changed to guidance, and I think we’ll see a lot of people stop wearing masks.”

Scottish First Minister Nicola Sturgeon announced at the end of March that the mandate to wear face masks would be extended until today, sparking public outrage.

The measure was expected to be lifted by the first week of April, but Ms Sturgeon told MSPs on March 30 that would no longer be the case.

This is the second time she has delayed dismantling the mission, which she had originally promised to lift by March 21.

She sparked further controversy by adding that face coverings will no longer be mandatory at places of worship, weddings and funerals on April 4, weeks before pubs and restaurants.

Opposition ministers from the Conservatives and Liberal Democrats accused her of “blatant hypocrisy”.

The First Minister was later reported to Police Scotland, who said they were investigating the matter.

She was also caught in December 2020 without a mask while attending a funeral. She apologized for that incident and described it as “a stupid mistake”.

Scotland’s infection rate is currently one of the lowest in the UK, with just under 6% of people, or about 1 in 17 people, infected.