A strong, negative-inclined surface tornado moving to the northeast is expected to trigger a return of abnormal moisture, which would pose a serious threat to Iowa and other areas. areas of the surrounding states this afternoon.

In other words: a system that is pulling the Gulf’s humidity much further north than is normal for this time of year. Additional humidity/instability combined with lifts, cold overhead air, and shear forces from the approach system can cause severe weather.

Note that the trench has a negative inclination, moisture flowing north towards the front of the trench, and even some pre-main event convection taking place over northeastern Kansas and eastern Iowa. 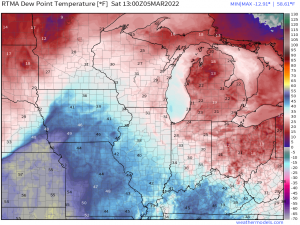 Humidity levels aren’t high yet, but we can already see dew points in the mid-50s creeping into the area in question. Moisture infiltration will increase during the afternoon as the low-level jet becomes stronger before the surface cyclone.

By afternoon, dew points are expected to be in the upper 50s and as low as 60 across the region. While these values ​​may be “above average” at this location at this time of year, they are still quite low for inclement weather. As discussed in Thursday’s blog, we’re going to rely heavily on cutting and lifting to get things going.

One factor that can make a big difference today is the broken cloud cover after the initial rain and storm surge. 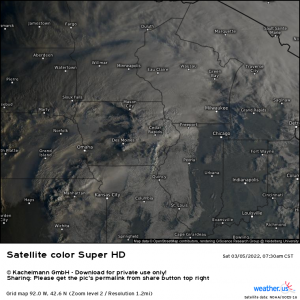 That’s exactly what we see on visible satellite right now. If these patchy voids can persist, daytime heating will add some instability to the atmosphere so that storms can follow. The more instability we have, the less we depend on cutting and lifting. Don’t get me wrong, we still need both, but a little uncertainty can change a conditional threat into a real one. 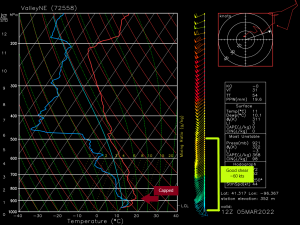 A sound observed from the Nebraska/Iowa line indicates a strictly confined atmosphere. To wear out that cap, we’ll either need to absorb enough moisture to break the cap, or use a lifting mechanism (front) to force air above it.

So if you’re monitoring the situation today, you’ll want to compare the observations with what the models predicted. Is the actual dew point/temperature higher or lower than the models predicted for the same hour? Is clearing more or less than expected? How long does morning convection last?

Most CAMs (convection-allowing models – like HRRR, RAP, NAM) indicate that the atmosphere would indeed become unstable for all extreme weather modes. If the observations are less than what was predicted, that may not be true. On the contrary, if they are ahead of what has been forecast, then stronger developments are possible.

Even now, the short-term patterns seem to be divided by potential 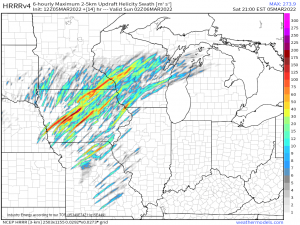 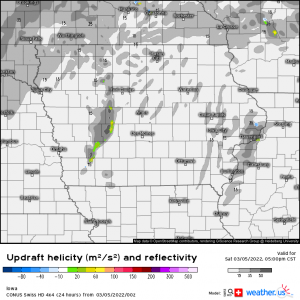 HRRR brings more humidity northward and then the threat increases. The ascending and descending helical vortices show great potential for cyclonic fluxes indicating supercells, some of which are capable of generating cyclones.

The Swiss HD, on the other hand, doesn’t deliver quality moisture far enough north. The best humidity does not coincide with the best lift, and the potential for supercells to produce tornadoes is relatively reduced.

What you take out of this discussion should be potential for strong/severe storms with the potential to cause strong gusts of wind/hail/several tornadoes is possible. And you should be prepared for that possibility. Watch for changing conditions and be ready to take shelter if an alert is issued.

We have a separate serious threat to talk about Sunday/Monday after – expect a blog discussing that threat tomorrow morning.