Welcome to a new week and also our third day of serious threat for many more weeks. This spring hasn’t had much of a breakout as it continues to bring us positive weather, both current and potential over the medium term.

Today’s inclement weather is underway as a few more sporadic cells have hit/crossed critical thresholds over the past hour.

Generally, the greater tornado threat in a setup like this comes from the discrete tiles in the front half of the event. Not so with tonight’s activity. 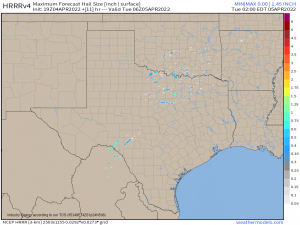 The biggest threat from the previous operation would be heavy hail thanks to the high airspeed facilitated by the cold overhead air. Wind damage would also be a concern, but not as worrisome as they would be during the overnight hours.

The current convection is expected to develop into a stream later this evening. Generally, this is when the main threat shifts from hail and/or tornadoes to strong winds. While the threat of damaging winds will fully increase with possible gusts above 75 mph, so will the QLCS tornado threat.

The surface low is forecast to deepen as it moves eastward during the night. As a result, the low-end jet gets stronger, pulling in more moisture and increasing shear. Once the chain travels further east, it will find an environment much more favorable for severe weather than the weather that begins tonight. 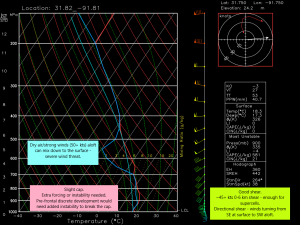 The acoustic forecast above was made from near the LA/MS border in the early morning (around 3/4/5am). Thus, we can clearly see that the threat will only increase overnight instead of diminishing as is more common than not.

For this reason, it is imperative that there are ways to receive alerts that are sure to wake you up. Get ready to execute your shelter plan immediately, especially when QLCS is expecting tornadoes. They are known to spin quickly and often reduce the time it takes to execute alerts. It may be prudent to consider sleeping in your safe space tonight if your area anticipates the early morning portion of the event.

The event will take place tomorrow morning and is expected to pose a strong threat later in the day for parts of the southeast. I’ll have a blog addressing that in the morning, so stay tuned!