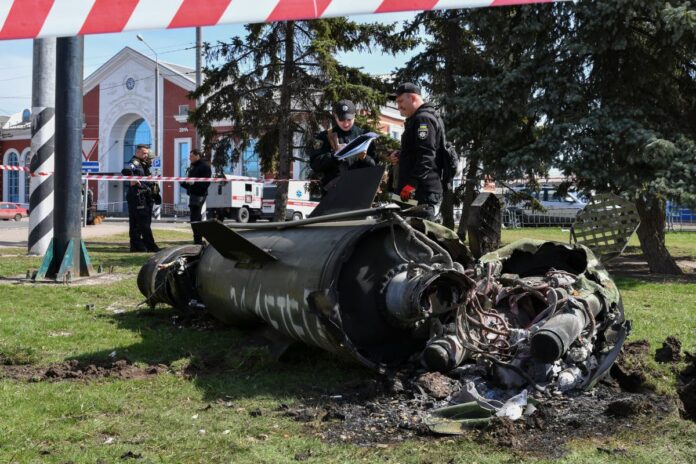 People have been urged to ignore a fake video circulating online with the branding BBC News showing Ukraine is responsible for a deadly missile attack on its own civilians.

The video, which uses the BBC News logo and the same red and white graphics shown on the television station, gives the false impression that the Ukrainian armed forces are behind a missile attack on a railway station in Kramatorsk, eastern Ukraine on Friday.

“The BBC is taking action to remove the video.

The mocking video, which is believed to have originated from pro-Kremlin accounts, has since been aired on Russian state TV and gone viral on social media.

The one-minute 27-second video shows a BBC-style explainer saying the missile’s serial number is the same as one fired by the Ukrainian military.

Below the text are graphic clips of bodies covered in the ground after the explosion, along with scenes of damaged towers across Ukraine and Ukrainian President Volodymyr Zelensky walking with servicemen.

In another part of the video, the text refers to the Ukrainian president as “Zelenskyy”, but the BBC’s website spells his last name as “Zelensky”.

The fake video also claims that “military experts emphasize” that Ukraine is using “fake news to promote its position”.

About 4,000 civilians were believed to be in and around Kramatorsk station when a missile hit Friday and 50 people were killed, according to Ukrainian authorities.

Photos from the scene show tarpaulin-covered bodies on the ground and the remains of a rocket with the words “For the Children” painted on it in Russian.

The Russian Defense Ministry denied that Russia was behind the attack.

President Zelensky and other Ukrainian leaders have accused the Russian military of deliberately targeting a location where only civilians are concentrated.