It’s no secret that this spring has more ups and downs (depending on temperature) than an amusement park filled with roller coasters.

Every time we get that icy blast, we hope it’s the last – but, alas, it never happens. And really, it’s not uncommon for these cold spells to last through April and even early May, if you’re further north. But that doesn’t mean we’re any less.

For the Eastern half of the United States, this past weekend has been beautiful. Summer-like temperatures sweep across the Great Lakes Region.

Humidity has also increased noticeably, making it even more like summer. Here in East Tennessee, we hit 3 degrees below the 90-degree mark with dew point in the mid-60s – a feature evident in early summer. 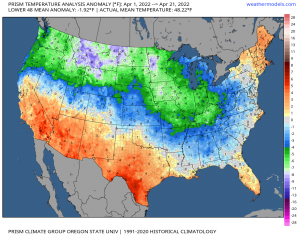 … Unfortunately, they have been overtaken by cold spells, leaving many places with significantly lower averages for April so far.

As the theme of this Spring, all good things come to an end. As I mentioned, every warm-up so far has been swift with a cold snap, and this week was no different. 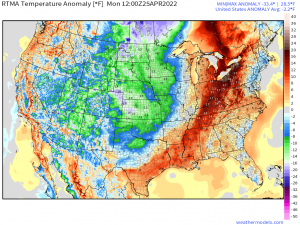 Looking at the current temperature anomalies map, you’ll notice places where temperatures were over 20 degrees on Saturday are now 10 to 15 degrees below average. So it’s on its way.

Unlike the most recent cold spells, this one won’t be as strong as it moves further east. While the Great Lakes and Midwest saw significant drops in their temperatures, the Northeast’s cooling wasn’t quite as drastic, especially near the coast.

Also, it won’t be as cold in the south as it has been in previous cold spells. Sure, the temperature drop will be noticeable, especially during the hot and humid weekend, but it really won’t be that much below average for most people. 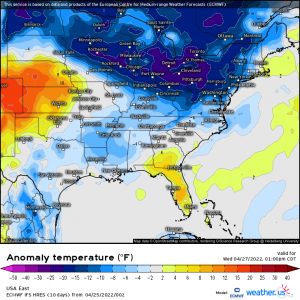 Unfortunately, when cold air filters on the back of the cold front, lake-effect snow can appear.

Fortunately, the amount of snowfall is not expected to be much with the total snowfall generally being less than 2 inches. However, it can be disappointing to once again hear that there is snow in the forecast if you are expecting persistently warmer weather.

Is this the last cold snap before warmer weather is here? 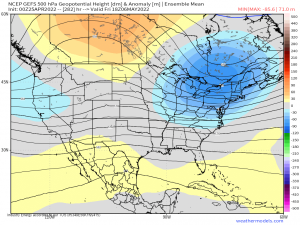 I wouldn’t bet on it just yet. Both EPS and GEFS have been fairly consistent in developing another bottom over the Great Lakes and Northeast into the second half of next week, though it doesn’t look as strong – at least for now.

However, warmer weather will return this weekend into early next, so be sure to take advantage of it!